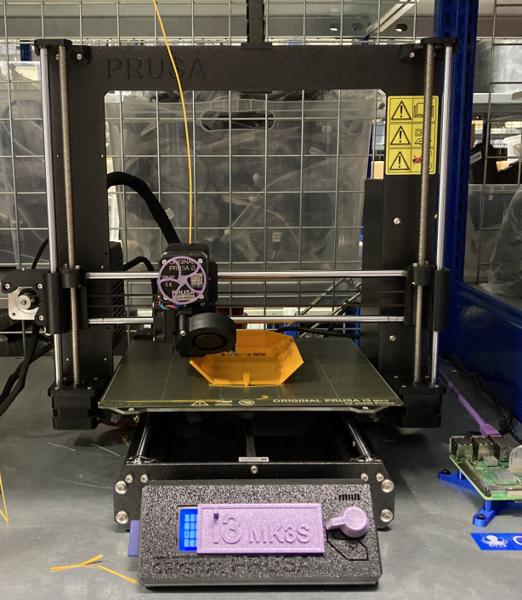 Dobby the printer and the chamber of the Spreenauten

For some time now, there has been a lot of excitement on Meeraner Straße. There's a new employee and he's got a lot on his plate. He works around the clock, never takes a break and just wants to be fed with tasty data. All in all, he's a real model employee, but most people don't like his name. His name is I3 Mk3s, which sounds strange, so he will appear several times in this news under the name ''Dobby''.

Dobby is a 3D printer and comes from the house of Prusa in 3 generation. Josef Průša designed the first 3D printer prototype in 2012 and about 7 years and several upgrades later Dobby was finally created. It is now one of the best-selling 3D printers in the world and is part of the RepRap project. The RepRap project does not come from the American hip-hop slang, but means Replicating Rapid-prototyper. These printers can print all the plastic parts that you need to use the printer, so they are their own spare parts store, as long as you use them correctly. All you need for the printers are the right data sets and a production material. The following materials can be used: ABS, polycarbonate, polypropylene, nylon and many more. This makes it very easy to produce radio components from plastic, at low cost and in a time-saving manner.

Product development is becoming increasingly important at Spreenauten. Individual 3D printers thus form the basis for the coming expansion into a 3D printer park. In addition to current projects, such as for the Weasl (Sneak Preview), we have been producing components for the individualization of radio technology for some time. Also installation aids, which help us to perform installations and work at the customer's site much faster, were produced with the help of a 3D printer. Thus, a small printer makes even the biggest customers happy.

We welcome Dobby to the holy halls and hope he will continue to inspire us with great 3D prints in the future!

Tags:
Popular tags
Archive
Download Dobby the printer and the chamber of the Spreenauten als PDF